Sometimes I snap up a travel souvenir that makes me go, ‘Aaah… s’lovely, that.  It’ll look ace on my mantlepiece/bedside table/dangling from the ceiling.’  But I long ago gave up buying objets de crap just for the sake of bringing something home. It’s obvious when you think about it. You’re in a tourist spot and you’re looking for something gorgeous. It’s not going to end well.

I recall hopping from shop to shop in the pouring rain in Taormina in Sicily looking for presents.  Unable to afford or carry any of the colourful swirly ceramics crowding the shop windows, I was looking for something delectable and bijoux. Richly coloured eggs made of marbly onyx type stuff were pleasingly smooth to the touch but what’s the point of an egg that you’d break your teeth on?

Many of the souvenirs in Taormino were made out of bits of volcano. Sicily isn’t short of volcanic stone, it positively 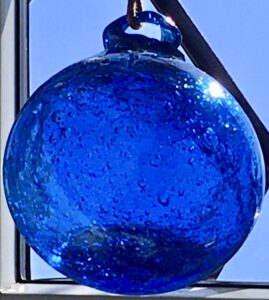 Glass bauble from the Khan el-Khalili Market in Cairo

explodes with it, in fact, so it’s forgivable that somebody probably picked up a fistful of the black, prickly lumps one morning, examined them closely with a furrowed brow and gave an excited yell of, ‘Eh, Elizabetta! Bring that box of googly eyes!  These’ll make great ladybirds!’

Over the years, I’ve amassed Egyptian glassware, a Turkish rug, an Ampleman tee-shirt from Berlin, a carved fruit bowl from Poland, batique clothing from Australia, a fancy metal-worked camel incense holder from Jordan, and a malachite bracelet from Tanzania which disappeared 30 years ago and resurfaced last week in a carrier bag of Lego.

The natural world has also yielded souvenirs, some more successful than others. The film-roll container I filled with Aegean seawater in a pre-homesick moment, was emptied itself on the flight back. The goat’s skull and assorted small bones I pulled from the sand in an Egyptian oasis got slung under the bathroom sink after being carteded back to London. They sat there for a year until I threw them out to head for landfill with the rest of Lambeth’s rubbish.

Pebbles, driftwood, pine cones, I’ve taken them all home at some time or other. On a deserted beach near Nuweiba in Sinai, my Egyptian man wrapped one of my sarongs round my son’s blond head as he collected snail shells in a glass jar. Three Bedouin women appeared and with their burqas starkly black against the clear blue sky, they displayed gleaming, beaded bracelets over the pebbles.
‘You buy from one woman, you must buy from all of them,” my Egyptian man explained.
‘But I only want one bracelet,’ I said.
‘This system here, Stephanie.’ he insisted. ‘They want you buy from all three.’
Feeling like a cash cow, I relented and bought 3 bracelets.  I don’t have them any more.  Don’t even remember what they looked like. 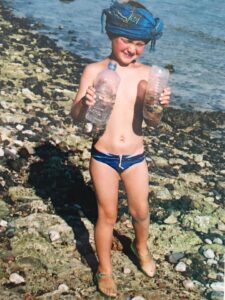 But a few of the tiny snail shells remain and now, 20 years later, their chocolate and honey coloured swirls trigger my maternal snapshot of my son on the beach clutching his jar of transient and imaginary pets.