Absolute top of the list of things to do in Tallinn is the KGB Museum at the Hotel Viru. Our guide, Jana,  was vivacious, animated and bursting with amusing stories about The Hotel Viru and its history.

It was built in 1972, to bring much needed tourist revenue into Estonia.  It’s bright and cheerful inside now but originally the decor was dark and gloomy, even a bit scary, with that typically Soviet, austere-but-trying-to-be-grand look about it.

Finland had a job shortage at the time and the Soviets wanted some of their oil so they did a deal and Finnish workers built the hotel which is why it took two years to build, instead of 7 or 8.

There was a three week gap between hotel completion and opening. Very handy. Gave the KGB time to get in there and install their radio equipment  and bugging devices on the 23rd floor –  the floor that didn’t officially exist. Although every so often, somebody would helpfully write next to the buttons in the lift, ’23rd floor – KGB’ and a cleaner would be sent to scrub it off, pronto.

The public lift stopped at the 22nd floor then a secret stairway went to the non-existent 23rd floor where there was a sign on the door saying ‘Nothing in here.’  One employee did wander into the surveillance room by mistake and found himself looking at the business end of a gun. ‘Oh hi guys, what are you listening to? Anything good?’ probably wouldn’t have been what he said to the men with the head phones. 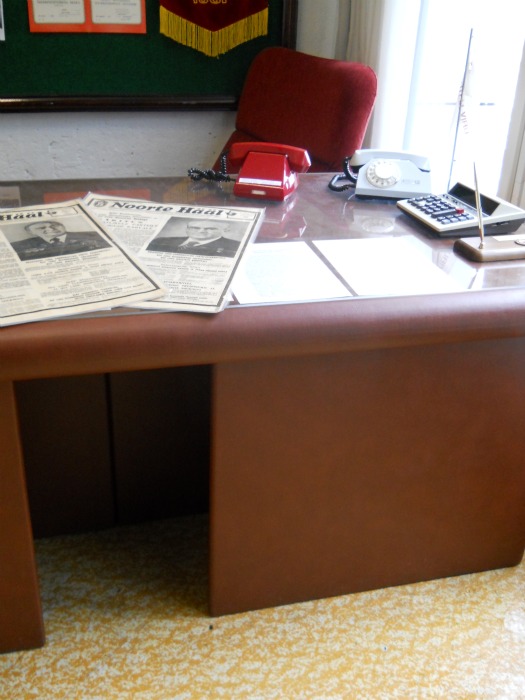 KGB office and telephones. The red one didn’t need a dial. It went straight through to Moscow.

END_OF_DOCUMENT_TOKEN_TO_BE_REPLACED

I am twitching with excitement.

The suitcase I’ve scrounged from my mum is going to be stuffed full of vests, socks, leggings, gloves, hats and anything else that is furry and thick. I am excluding next door’s dog. He is furry. He is also thick. But I’m not taking him on holiday because his breath smells.

Anyway, back to Tallin. It seems nobody has a bad word to say about the place. Visitors love it. They wax lyrical about the beauty of the Old Town, the thick snow and pretty teraccotta roof tops END_OF_DOCUMENT_TOKEN_TO_BE_REPLACED

I hadn’t been meaning to go there.

But then I read about espionage and the Cold War in Estonia,  burrowed in my bed at 6 o clock in the morning, in my leopard print, egg-stained dressing gown, while a gale blew a tune on the loose guttering outside.

The pretty pictures of gingerbread buildings and onion towers, the moody snaps of dark alleyways and disused KGB equipment were irresistable.  I recalled my travels in Poland and East Berlin, many years ago, before the collapse of Communism END_OF_DOCUMENT_TOKEN_TO_BE_REPLACED