I was delighted by the Ampelmann, East German traffic light man, when I visited East Berlin in 1987, during the Communist era.

His jaunty hat looked in danger of slipping off in his feverish determination to get to the other side of the road, causing me to spend an unhealthy amount of time pondering the artistic merit of our traffic light designers in the UK.

I was back in Berlin last summer and thrilled to see the lively Ampelmann was still there, encouraging everybody to either march across roads or stand with our arms outstretched on the corner.

The Ampelmann is a much-loved, very familiar symbol of the former GDR and he still stands (or marches)  happily on across roads in Eastern Germany today.  But his life wasn’t always so carefree.

He was conceived as a child-friendly traffic light by Karl Peglau who felt that humans, especially children, would respond more quickly to an image than to a changing light so his secretary, Anneliese Wegner, designed the two Ampelmannchen.

The East German traffic light man made his debut appearance on Friedrichstrasse, East Berlin,  in October 1961.   He was an instant hit amongst children and adults alike, becoming so popular that he appeared in comics, games and radio stories.  He even became a film star in East Germany, featuring in road safety clips for children.

Life was looking good for the Amplemann.  But in 1989, the Berlin Wall was torn down, Communism collapsed, Germany was reunified and many people had a whopping big party.  But as the dust settled, the future began to look shaky for our red and green hero.  Politicians, town planners and those annoying chaps with clipboards, got in a huddle and hatched a plot:

The traffic light man’s got to go.   (Murmurs of agreement).
Let’s banish him forever! There’s no place for him in this shiny new city we’re going to build. (Much nodding and clipboard scribbling).
Excellent. We’ll bring in nice smart traffic light man like all the other cities have got. 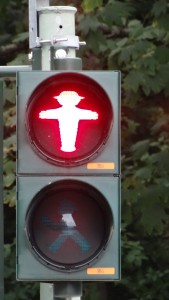 The authorities, in the time honoured tradition of replacing character with bland functionality, cared not for any objections that may have come their way and within a few years, the little marching man of the former German Democratic Republic became  a sad, broken heap under the ground.  Meanwhile his replacement, a lifeless, lanky fellow imported from the West, took the Ampelmann’s place on street corners.  A symbol of modernity and efficiency, he lacked the charisma of his predecessor.  But he got the job done so that was alright then.

Well no, it wasn’t really. The Ampelmann was missed by many.  Clearly this fairy story needs a saviour. And here’s where it gets a bit murky.  Enter designer Markus Heckhausen, a designer from West Germany, who wanted to make lamps out of the old Ampelmannchen. Finding none available, he approached Joachim Rosberg from Signaltechnik, who had made the traffic lights.  Rosberg liked his idea but it was Karl Peglau, the orginal inventor, who owned the rights. Heckhausen bought the rights from him and made  half a dozen lamps bearing the Ampelmann which were eagerly snapped up by various buyers.

The little marching traffic light man became a sentimental icon and by 1995 a resistance movement, The Committee for the Preservation of Ampelmenn was formed. The Ampelmann appeared on tee-shirts and mugs until a court ruled that Heckhausen held the rights to the image.

Meanwhile the East German traffic light man was not only reinstated in the former East German but also installed in Western Berlin and some other German cities too.

And Rosberg?  He produces Ampelmann schapps, glasses and pens and in 2004 he designed an Ampelfrau but in the mid 2000s the legal wrangling was still going on.

Finding information on this legal twist to the Ampelmann’s tale has been practically impossible. I’ve been unable to find much information about the outcome  so would be very happy if you can shed any light on this I would love to hear from you. 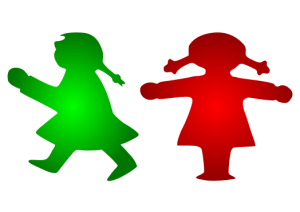 One thought on “The Ampelmann – East German Traffic Light Man”