The Beast from the East has barged into East Lancashire and it’s bloody freezing. I’m really glad I don’t live in one of those countries where the only water is in icicle form, your feet freeze to the pavement and you have to go outside and chop up sticks to feed the fire that keeps you just the right side of death.

This morning, a woman walked past my house pulling a small child on a sledge. The sledge was the traditional kind, wooden slatted top with curved metal runners, same as the one I got for Christmas as a six year old. Mine had blue painted runners and a rope for steering. That was the idea anyway, more often than not I’d end up in the bushes or wrapped round some other kid on a sledge. 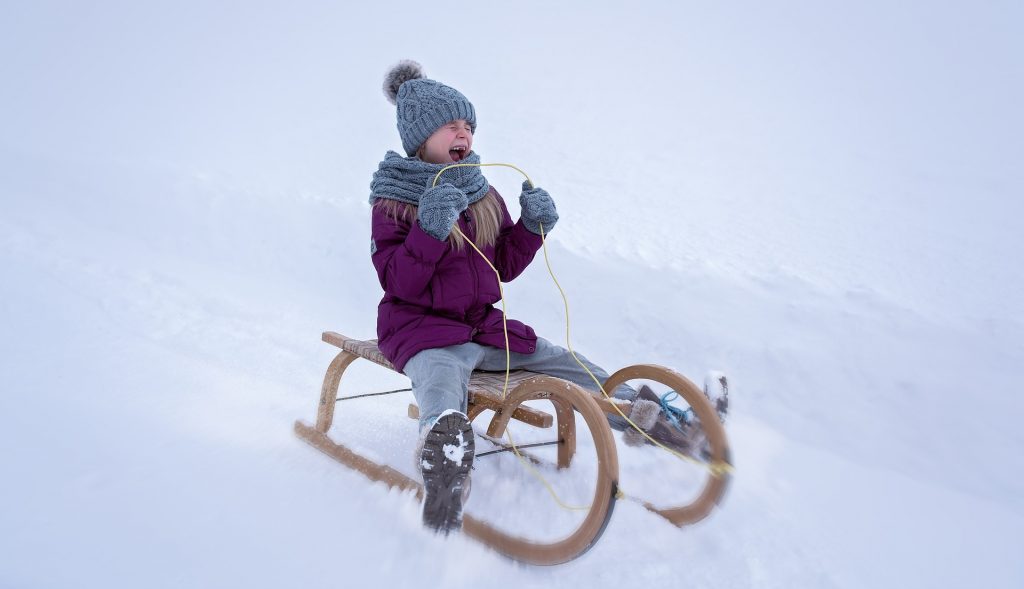 Watching the kid being pulled along earlier, didn’t just evoke visual memories. The feelings came back. That sudden sense of weightlessness, of sliding away downhill and the unforgiving bumps to the bones under the buttocks, shooting up the back, jarring it, dodgem style. It’s an unlikely combination – the smooth sliding and unpredictable bumping.

More sledgy feelings: watering eyes, fingers and toes numb yet smarting; the tops of your ears stinging as though they’ve been sliced off. A bitter assault on the nose as the cruel wind causes the hairs in your nasal passages to crackle like splinters of ice. Creeping wetness from snow which has sneaked inside the folds of your scarf, down the tops of your boots and into your gloves.

What about the sounds? Swishing sledge runners, whistling wind, the squeals of kids as they slide downhill.  Your strained breathing and the flump flump of your feet in the snow as you trudge uphill trailing your sledge behind you.

Smells? Rubber wellies, salty sweat, the sharp tang of a handful of snow (yes, it does have a smell.)

These jolts to the memory are a fast track to your own personal bank of sensations which you can draw on to enrich your writing. You may not be writing about the same thing but you can use your own sensory memories.

Perhaps your character is escaping from an evil empress/POW camp/a draconian boarding school. They’re caught in a blizzard (be boring otherwise, wouldn’t it?) but they have to keep going otherwise the prison guards will shoot them, the evil empress will turn them into a snail, the school prefects will give them a good thrashing.

Okay, it’s not the same as larking around on a sledge but your character will get the same crackling nose, sliced off ears, howling wind and needles of snow to the face only with far greater intensity.

Creative Writing Exercise:
Close your eyes and revisit a shop you went to as a kid. A sweet shop, corner shop, school uniform suppliers, shoe shop – whatever evokes memories. Use all your senses. What can you see, hear, smell, feel, taste?

Does one sense trigger another?  For example, there’s a shop in my town that sells cheap shoes and the stink of rubber is so overwhelming it’s suffocating. Smell, in this case, triggers a physical sensation.

Do any of your sensory memories induce emotion? Do the smells of plimsolls and acrylic in the school uniform shop make your chest tighten with anxiety as if you were back at school? Maybe it’s the opposite – you’re happy and excited to be going back.

Note all your physical and emotional sensations then get writing. Splurge it all down – pen and paper can often work much better than the keyboard for an exercise like this – without thinking.

Keep writing and see where you end up. Could be the start of a story completely unconnected with the shop. You could end up with a string of unconnected feelings, fragments of dialogue. Possibly, you’ve zoomed in on one small part of your shop and expanded it.
Anything goes for a writing exercise like this. As always, writing exercises are meant to free up your imagination.