The exuberant paintings of the East Side Gallery, Berlin are often provocative, sometimes poke fun and often depict the dark side of the Communist regime.

The gallery sits on the banks of the River Spree in former East Berlin.   The ‘canvas’ is a 1.3km length of the Berlin Wall, one of the few remaining sections still standing. The gallery was founded in 1990, the year after the Wall came down, and features over 100 paintings from artists all over the world.

Naturally the Wall was loathed by the people of East Berlin; it was vandalised and scrawled with graffiti during the Communist era but the East Side Gallery, with its collection of bright paintings is a physical reminder of the regime that divided families and pulled friendships apart.

One of the most famous paintins is by Dmitri Vrubel of a kiss between Brezhnev, former Soviet leader and Honecker, former GDR leader.  The caption translates as My God, help me to survive this deadly love. 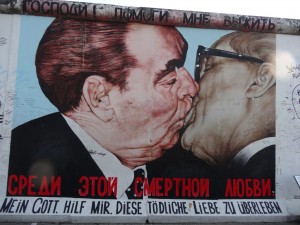 END_OF_DOCUMENT_TOKEN_TO_BE_REPLACED

Easyjetting to Berlin on Monday.

I will do my best not to break or lose either of them.

However I am still confident about finding my way around all three.