Larry was a lavishly coiffured, shiny-suited chap who sold tights and stockings in our local market hall. He paid partly in cash, partly in boxes of chocolates. Nice chap but misguided enough to give me a Saturday job.

He also employed Dora and Elsie, two older ladies who, despite their slavish devotion to the application of makeup, had never quite mastered the art although they were rather more successful in their attempts to emulate Larry’s extravagant perms.

My experience of tights -or pantyhouse as our American cousins call them – was limited. As with many dalliances that seem like a good idea at the time, but end in disaster, I had approached them with gusto and discarded them just as quickly.

You pulled a tiny, scratchy scrap of something brown, black or grey out of a packet, stuck a wiggling hand down one of the legs (the only entertaining part of the process) then you sat on the bed and stuck your legs in the legs. So to speak.

This seemingly simple act presented a myriad of possible outcomes, all of them uncomfortable. 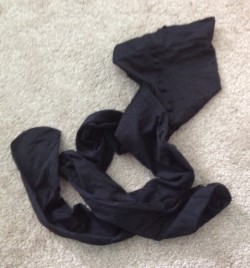 A snagged toe or fingernail could rip a ladder from toe to gusset in 2 seconds flat.

Or I would get one of the tight’s legs twisted round so that when I tried to put my other leg in, the leg I needed would be on the wrong side of my body.

Sometimes I’d get my tights my tights in place and feel very pleased with myself for 2 seconds before realising I’d forgotten my knickers so I’d have to haul the tights off and start all over again.

Then there were the tights that refused to go all the way up so I’d spend the day waddling round, pinned together at the knees.

And all this took time. If it took ten minutes of wriggling limb contortions per day, and I wore tights from the age of 15 to 80, that would be 65 years of tight wearing which, I calculated, would mean spending a whole 5.5 months out of my life putting tights on, just so I could waddle round with itchy legs all day.

So I made it a lifestyle choice never to wear tights. In fact, many years later, when a Job Centre woman offered me an interview at the Bradford and Bingley Building Society, my only question was, ‘Will I have to wear tights?’

Anyway, back to Larry.

He sold a bewildering assortment of hosiery:  thick black tights; dainty, sheer stockings; American tan tights in triple packs; tights to get married in, tights for work, tights for truck drivers, tights for hanging yourself upside down by.

I could cope with the tights. It was the gussets that made my life a misery. There were diamond gussets, triangle gussets, rhomboid gussets, cotton gussets, nylon gussets, reinforced gussets (don’t ask), tights with mere seams for gussets and, to my dismay, tights with no gusset at all, just a hole.

Elsie and Dora would try to catch me out by giving me tests.

Elsie would corner me with a glint in her eye and a fistful of gussets. ‘Now,’ she’d say, ‘Find me the pocket sprung, trapezoid gusset with breathe-easy, cross-stitch overlay.’

Then it would be Dora’s turn. Licking her lips and moving in for the kill, she’d ask, ‘Which is the over-locked, diamond, cotton gusset with windscreen wipers and reinforced concrete bunker?’

Mostly I’d close my eyes, reach out a hand, pick a gusset at random and, in a hopeful, I’m-giving-this-my-best-shot, kind of way, say, ‘This one?’ inducing cries of, ‘No, no, no, you stupid girl!’

Then the two of them would pelt me with packs of American tan, flick me with suspender belts and batter me over the head with the false legs off the display.

Then Larry sacked me and I had nightmares for months, sweating in my sleep, mumbling, ‘Diamond … no, triangle … is this gusset reinforced? …. this one’s got no gusset…. no! No! Please don’t hit me with that leg ….’  then whoever was sitting next to me on the bus would prod me and say, ‘Are you alright luv?’

I recovered in time and got a job at the KFC where, unlike the tights stall, I could eat the stock, do some cooking and lark around without anybody sticking a handful of gussets in my face.

If you had a disastrous Saturday job when you were younger, do feel free to share 🙂